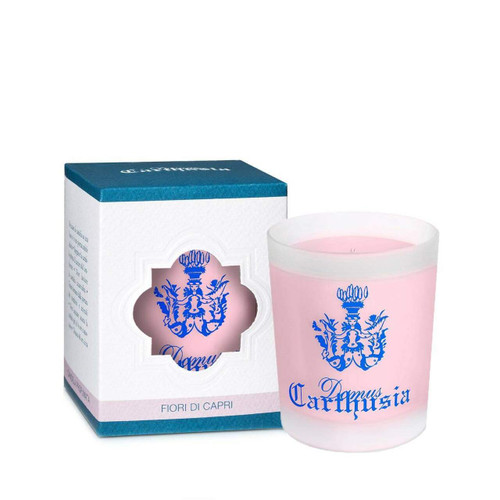 The first Carthusia fragrance ever, Fiori di Capri marries rich floral notes derived from the lily of the valley and wild carnation. Accents of sandalwood, ylang-ylang and oak add an enigmatic allure to this candle. Presented in a box with a typical Caprese window, which lets you catch a glimpse of the contents inside. Perfect for perfuming every corner of the house. Saison is the exclusive Australian importer and distributor of Carthusia. Large Size 190gm.

Capri, the Italian island of dreams, has been an enchanting oasis since Roman times. Its natural beauty, sunny climate and innate glamour are legendary. In 1380 the Father Prior of the Monastery of St. Giacomo was taken unawares by the news of the arrival on Capri of the Queen Giovanna D' Angio' and so made her a flower arrangement with the most beautiful island flowers. The water was not changed for three days and, when the flowers were discarded, the prior noticed that the water had acquired a beautiful fragrance unknown to him. He went to the father alchemist who traced the origin of this scent back to the "Garofilium Silvestre Caprese". That water became the first perfume of Capri. Forgotten for many years, in 1948 the Prior of the Monastery discovered the old perfume formulas and by permission of the Pope, revealed them to a chemist, who created the smallest fragrance laboratory in the world and called it 'Carthusia'. Today the perfume tradition continues and limited production ensures the same methods used by the Carthusian monks are respected.